A Storm of Books and Stuff 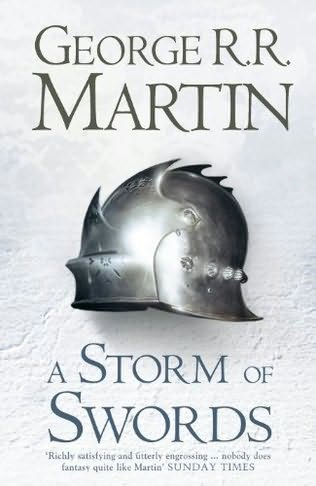 I FINALLY finished ‘A Storm of Swords’ today. WOW. What an amazing, epic whale of a book. It took a couple of months to get through that, but it was worth it. The damn thing was over 900 pages. The world of Westeros and Beyond really expands in this book, as does the appearance of magic, plus there are some huge power shifts that happened in the major power players of the book. To a degree, this book feels to me a little like Anne Rice’s ‘Queen of the Damned’, the third book in her Vampire Chronicles and easily the most epic in scale. After that, all the other Vampire Chronicles in my opinion felt flat in comparison. I hope that is not the case for the next two ‘Song of Fire and Ice’ books.

Just started on the final book in the Hunger Games trilogy. Suzanne Collins is a really good writer so I’m liking it already. Should be an easy read. Plus, as much as I love the Westeros speech, its nice to read about normal talking people again.

L5 begins at what in any other story might be the end. The crew of a deep space exploration vessel returns home after what was supposed to be a 20-year mission and finds planet Earth, apparently, deserted.

Check it out. Looks promising. And here’s the show’s Kickstarter page for more info on funding.