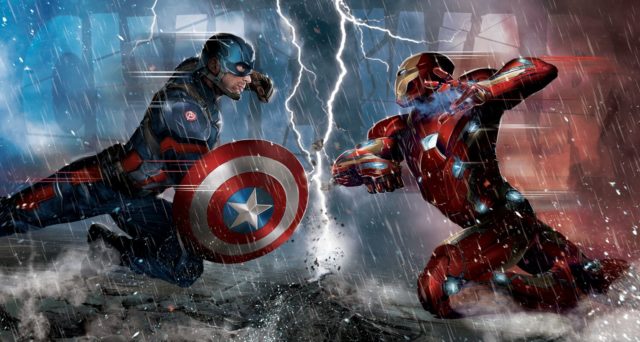 Took me a minute to get to this, and I know the film has been out for two weeks. But still, I wanted to share some thoughts on Marvel’s latest blockbuster, Captain America: Civil War aka Avengers 2.5.

The third in the Captain America trilogy accomplishes a very rare feat. Whereas most superheros can never achieve the perfect movie trilogy (The Dark Knight Trilogy, Iron Man, etc), Captain America has done just that. Each film has gotten better and better, built upon not just the mythos and ethos of Steve Rogers, but also the continuing narrative of the Marvel Cinematic Universe.

The films kicks off with the Avengers team in Lagos (LAY-gos) Nigeria. The wrong pronunciation of Lagos one of the few major issues I had with Civil War. what appears to be a tough but successful mission turns into a catastrophe when Scarlet Witch accidentally destroys half of an occupied building.

After this event, Sokovia in Age of Ultron, DC in The Winter Soldier and New York in Avengers, the world will no longer tolerate superheroes walking around without supervision. Captain America is very much against superheros at the leash of any government makes sense given what happened with SHIELD in Winter Soldier. Iron Man aka Tony Stark is for Superhero Registration. Given his actions in Age of Ultron and especially after encountering a grieving mother who lost her son in Sokovia, Tony is ready to be held accountable.

Enter Bucky Barnes aka The Winter Soldier. He’s been in hiding ever since the fall of SHIELD. But now he returns in a huge way, as the mastermind of a UN bombing that kills several diplomats, including the current King of Wakanda T’Chaka.

After that, the movie goes bonkers in all the best ways. Everyone is out for Bucky’s head, even though he might be innocent. Cap races to find his best friend before the FBI, CIA and T’Challa (The Black Panther) kills him. And unknown to everyone, a new player enters the game with a vendetta against the Avengers no one sees coming.

While many people really liked The Winter Soldier, me included, I felt this film was the best in the Captain America trilogy. Civil War took 8 years of Marvel films, 8 years of being invested in these characters and blew it all apart. Everyone’s motivations made sense, no matter how wrong they were. It was heartbreaking in many ways, especially toward the film’s conclusion.

The film had a massive cast, even more massive than either Avengers films. But the Russo Brothers and the film writers gave everyone character depth, motivation and some kind of kickass scene. From the introduction of Black Panther, to Spider Man 3.0 shining in every way and cracking wise while he fought, to Paul Rudd’s Ant-Man fanboying all over Captain America. Everyone got their moment.

My favorite scene in the film was the massive airport brawl between Team Cap and Team Iron Man. I felt giddy with joy the whole time, still dazed over watching Spider Man side by side with Iron Man and fighting Cap. The film featured three black superheroes each with their own motivations and agendas. Everything worked. A few other things made this film work.

When things felt like they were headed toward bloated territory, the narrative shifted to the personal stories like Bucky and Cap’s longtime bond or Tony struggling with having to brand his friends criminals despite doing the right thing. No side was entirely wrong and no side was entirely right.

Even better, the actual bad guy of the film was not really a bad guy. Zemo wasn’t trying to destroy the world or topple a government. He was out for revenge and followed through on his goals. How refreshing was it to have a superhero film that didn’t end with some zany villain trying to take over the world??

They said “Lagos” wrong like five times. It bothered me!

CONCLUSION:
I loved Civil War and saw the film twice. You should too if you enjoyed it! In a time where comic book films are in danger of over-saturation and geek is now the norm, this film showcases the best of the superhero genre while tackling rather contemporary themes. Government regulation, vigilantism, loyalty, betrayal, revenge and ideological divides are all on the table.

What’s great is how we watch the Avengers come back from the events of this film. How will the get their act together and fight off Thanos, whenever that lazy ass decides to show up. Can these heroes mend fences or will some betrayals never be forgiven? Now that Cap is a fugitive who just broke out his allies from the Raft, will we now see the Secret Avengers? Plus, I want a Blank Panther film now, please. Thank you!