Every hero has a beginning. So does every villain.

Choose your side in The Pantheon Saga. 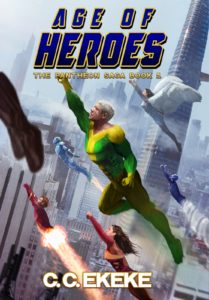 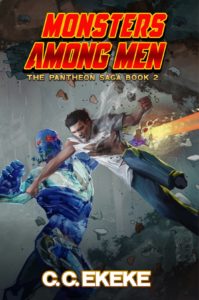 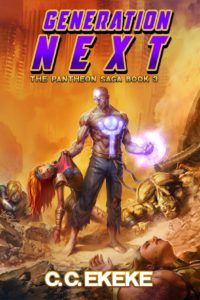 Titan, the world’s greatest superhero, has been murdered by his longtime archenemy Lord Borealis. And from the ashes rises a new generation.

Gifted with powers on the night of Titan’s death, fifteen-year-old Hugo awakes to the strange world of superheroes. A world he isn’t prepared for.

But with godlike powers and a history of tragedy, will Hugo become a guardian of justice…or agent of chaos?

Choose your side in Age of Heroes, Book 1 of The Pantheon Saga.

Titan is dead. And the world needs heroes more than ever. Hugo’s dream of becoming a superhero blows up in his face. And the impossible rage that remains pulls him deeper into darkness.

After several successful battles, Greyson’s ragtag team rides a wave of stardom. But what people love more than celebrating their heroes is tearing them down.

And Quinn’s derailed investigation into Titan’s murder leaves her reputation in shambles. But this journalist’s relentless pursuit of the truth could cost more than her job. These strangers are on a collision course with destiny. And each other.

Join the fight in Monsters Among Men, Book Two of the Pantheon Saga.

Hugo continues his superhero training, eager to join the good fight. But when a deadly new enemy strikes close to home, he’s forced to make a choice: become the hero he wants to be, or the hero his city needs.

After exposing Titan’s murderer, Quinn’s next story explores the world of teen superheroes. And the deeper she digs, the more layers of corruption she uncovers.

Greyson is now hiding out on foreign soil. But if he doesn’t learn the rules, his refuge will become his grave.

Their fates will shape the next generation of heroes…and villains. Grab your copy of Generation Next, Book Three of The Pantheon Saga!