I like many watched and thoroughly enjoyed Neil Blomkamp’s debut feature-length film District 9. It was a fresh new voice producing a wholly original science fiction film, something that I hadn’t seen in years. Aside from that, this guy new how to use compelling CGI and he had Peter Jackson’s blessing. Of course everyone was salivating at what Blomkamp would do next.

Then his followup film, Elysium, came out two years ago. Ooph. Beautiful looking film, limp and preachy story with themes that hammered you into submission. Blomkamp still had a decent amount of good will from ‘District 9’, so the general consensus deemed Elysium a misfire. That then leads us to his third film, the sci-fi film ‘Chappie’ released on March 6th. So what’s it about and how was it? 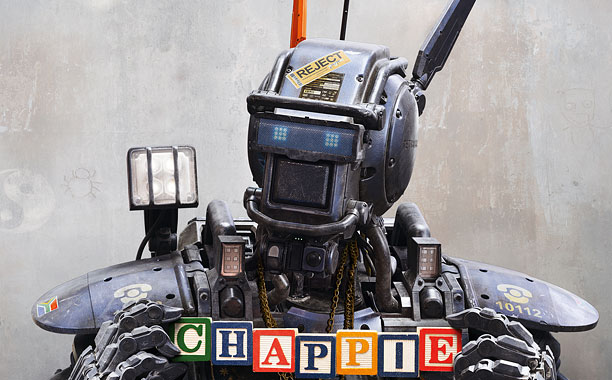 Plot:
Chappie takes place in Johannesburg (natch) in the very near future where the city relies mainly on a mostly robotic police force with very encouraging results. The weapons manufacturer that supplied the robots, Tetravaal, is run by Michelle Bradley (Sigourney Weaver) and employs the inventor of the robotic police force, Deon Wilson. Also employed by Tetravaal is Vincent Moore (Hugh Jackman) a former soldier turned engineer who is stewed in bitterness over how his own robotic project the oversized MOOSE keeps getting pushed aside by the robot police force. Deon doesn’t want to rest on the laurels of his success, but move forward and create robots who think and feel, basically a sentient AI.

Of course, at a weapons manufacturer, the idea of a robot that reads poetry and draws goes over as well as a lead balloon. Did he not know where he works? Anyway…
So of course, Deon works on this project in secret and plans to use a recently slagged police robot as a test model. This dovetails into another plot this movie is telling.

We also have the tale of three gangsters, the main two being Ninja and Yolandi (played by Ninja and Yolandi of the South African rap group Die Antwoord) who have run afoul of a local gangster who wants millions from Ninja or else. In order to get the money, they decide to kidnap Deon so he can program one of the police robots to do their bidding. Of course, calamity and self-aware robotics ensue!!

Review:
Without giving too much away, I’ll be honest with you. Chappie was not Short Circuit reborn. It was poorly written and mediocre. The characters were jarringly one-dimensional, many making truly stupid decisions that had no logic behind them no matter how immoral they might be. Even worse, certain situations toward the end of the third act of the film completely throw technology or grounded sci-fi out the window. So yeah, I was not amused.

Yolandi (from Die Antwoord) wasn’t that bad of an actress, she actually was quiet fascinating to watch. But Ninja should NEVER be allowed to act again. EVER. The guy has no screen presence and his strictly street attitude got very grating very quickly.

Hugh Jackman’s Vincent Moore felt very phoned in, even though Jackman did at least make an effort. The character made really horrible decisions that flied in the face of logic. Like pulling a gun on a co-worker in the middle of a work office. Or sabotaging a massive project, which put millions of civilians at risk, just so his little pet project gets ahead. Even by the end when he gets his comeuppance, it feels hollow.

I already mentioned some of Deon’s foibles above, but the character was rather stupid for someone so smart. Stealing company property and resources, along with not calling the police on the people who kidnapped you would have made sense. And his fate at the end of the movie felt eerily similar to what happened at the end of District 9.

I don’t have much to say about Sigourney Weaver’s character because she didn’t do much onscreen. She played the typical harried boss who only cared about the company bottom line. End of story.

That leaves me with the titular character, Chappie. Played by recurring Blomkamp collaborator, Sharlto Copley is motion captured to bring the robot Chappie to life. Of course he’s good as always. It was more potent in the beginning when Chappie was essentially a child rapidly learning about the world. Though Chappie’s minimalist face doesn’t give us much of a window into his feelings. But his actions and words were very telling.

Its unfortunate that this film, while gorgeously shot with stunning CGI, will go down as yet another black mark on Blomkamp’s once-promising career. The guy is a fantastic technical director, but I agree with other reviewers who feel that he should leave the scripting duties to someone else.

Chappie as well as Elysium are spotlights on his deficiencies as a screenwriter, particularly solid plots, creating complex characters and showcasing themes without hammering you over the head with them.

I and many others keep hoping that District 9 was not a one-hit wonder for Blomkamp. At the same time, here’s hoping that someone else will be writing the Aliens film Blomkamp is directing.