Book 1 of the Star Brigade Series 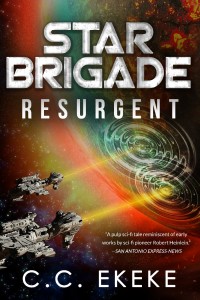 In the year 2403, Earth’s former citizens are now a leading species in the Galactic Union of Planetary Republics, a star-spanning bastion of peace and diversity.

If faced with terrorist threats of extraordinary origins, one of the Galactic Union’s top military weapons is Star Brigade–a special ops unit dedicated to terminating such threats quickly and quietly.

But an old enemy returns on the eve of a historic trade merger, with a deadly vendetta that could bring the Union to its knees. And with Star Brigade’s standing tarnished after a past mission gone tragically wrong, the cost of failure has never been higher.

“This book is a stunning sci-fi novel…a fascinating, light yet powerful sci-fi story that will keep you up many a late evening and is enjoyable as well.”
Crystal Reviews

“Star Brigade is layer after layer of superb science fiction by first time novelist C.C. Ekeke. The subplots are intriguing, ambrosial and leave the reader craving more, and more, and more.”
Huntress Reviews

“Mr. Ekeke’s book has the seeds of many future Star Brigade novels ahead of it, and a roster of characters certain to please. Check it, and the Brigade’s universe, out!”
The Sci-Fi Zone Radio Show

“There are few things in life more enjoyable than a rollicking good science fiction adventure, and that is exactly what C.C. Ekeke serves up in his debut novel.”
Daniel Jolley, top Amazon reviewer

“Star Brigade is a wild science fiction space opera…It is so rare to find classic science fiction today because it is so difficult to develop new beings, settings, and cultures. This author has done an excellent job of these.”
Heartland Reviews