REVIEW: X-Men Days of Future Past

Just saw the new X-Men film, Days of Future Past. It takes its name from one of the more popular X-Men comic storylines in the 80s dealing with time travel and preventing a terrible dystopian future. This film is also the first X-Men film to star both Xaviers (Sir Patrick Stewart, James McAvoy) and both Magnetos (Ian McKellen, Michael Fassbender). If that wasn’t enough, this is also the first X-Men movie directed by Brian Singer since 2003’s X2: X-Men United. Was Bryan Singer’s return just what the franchise needed? Did the movie live up to the hype?

At the beginning of this film we are presented with a very grim future. Mutants have been hunted to the edge of extinction thanks to hunter-killer robots called Sentinels that can adapt to virtually any mutant ability. Any humans that either helped mutants hide, have a latent mutant gene or can bear mutant descendants get hunted as well. We see familiar faces like Magneto (Ian McKellen), Xavier (Patrick Stewart), Kitty Pryde, Wolverine (obvs), Iceman, Storm and Colossus. There are also new faces like Sunspot, Bishop, Warpath and Blink who get a few lines here and there along with cool displays of their powers. They are what’s left of the mutant resistance against the Sentinels.

How did life get this bad for mutants? It was all thanks to a pivotal event in 1973 when Mystique (Jennifer Lawrence) assassinated Bolivar Trask at the Paris Peace Accords to stop his mutant-hunting robot program and to avenge the friends his experiments had killed (ie explaining the absences of Angel, Azazel, the White Queen and other characters from X-Men: First Class). Trask’s death gave the governments of the world full justification to continue his Sentinel project. And in an interesting twist, Mystique’s DNA actually provided the means for Sentinels to adapt to any mutant power. So the embattled X-Men of the future hatch a desperate plan of salvation by changing the past. 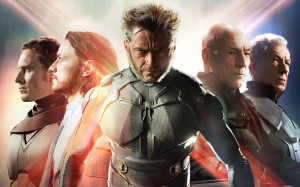 In the original comic story, Rachel Summers, Cyclops and Jean Grey’s daughter from an alternate future timeline (just pretend that makes sense, non-comic readers), sends Kitty Pryde’s consciousness decades back into the latter’s younger body to warn the X-Men of this dark and grim future. But in the Days of Future Past film it was Kitty Pryde who sends Wolverine’s consciousness back into his younger body around 1973 to warn Xavier and Magneto of the coming storm. Kind of made no sense since telepathy’s not remotely one of Kitty Pryde’s powers, but let’s not nitpick.

Wolverine arrives in 1973 in his younger self some time before William’s Stryker’s Weapon X program bonded the adamantium to his bones and claws. Xavier has abandoned the mutant dream, holed up in his mansion under the care of Beast (Nicholas Hoult) and has found a way to walk again at the expense of his telepathic gifts. Magneto is in a more literal prison. Having been implicated in JFK’s death, the master of magnetism resides in a non-metal supermax jail at the bottom of the Pentagon. And Mystique is on a global one-woman mission to stop Trask by any means necessary.

To be blunt, there is a lot going on in Days of Future Past. After Wolverine is transported to the past most of the movie stays in 1973 as he tries to bring Xavier out of his self-loathing despair as well as break Magneto out of prison so they can stop Mystique from unintentionally ruining the future. At the same time the film jumps back into the future to show the futuristic Sentinels closing in on the remaining X-Men for the final blow.

However, Singer is more than up for the task. Days of Future Past is great, not perfect, but still great. Its a brisk mix of action, adventure, urgency and some laughs while bringing the drama as these broken and flawed leaders of the mutant race (Magneto and Xavier) try saving the future in ways that don’t usually coalesce. Not only that, the film didn’t feel long at all despite its over two-hour length. We also get some cameos from various characters who were in past X-Men films, including the return of a few fan favorites.

Both McAvoy and Fassbender bring it in their scenes together, showing two former friends who might hate what the other has become but still care about one another. Unlike in First Class, Magneto has no internal conflict when it comes to mutant supremacy. He truly embodies a young Magneto full of fiery passion and resolve to do whatever it takes to ensure the mutant race’s survival. At the heart of Xavier and Magneto’s conflict is Mystique, played wonderfully by Jennifer Lawrence. She really owns all the dramatic scenes she’s in, adding layers to a character that came across mainly as a femme fatale in X-Men and X2. Most importantly, while bringing it dramatically, Lawrence is much more believable in becoming that kick-ass mutant initially played by Rebecca Romijn.

One of the real standouts in the film was Evan Peters’ Quicksilver. Before the film came out, I was prepared to hate the character with his overly cheesy costume and hair. But Quicksilver was actually one of the best parts of the film, especially when we see him breaking Magneto out of prison. There is a potential hint at his parentage that comic fans will immediately catch, but its not too heavy-handed to ruin the scenes he’s in.

In short, this movie was great, continuing a trend of quality X-Men films after First Class revitalized the franchise. What told me of the movie’s cross-over appeal was that my friend who has no interest in anything sci-fi or comic book-related, really enjoyed Days of Future Past and wanted to see more of the past X-Men movies. I obviously told her to stay clear of X3 and X-Men Origins: Wolverine.

Plus, we got a post-credit scene teasing at the next X-Men movie. Love that Fox is taking a page out of Marvel’s playbook and doing it effectively.

2 comments on “REVIEW: X-Men Days of Future Past”